A story of the endeavors toward realizing a vision
Education

Lecture at the University of the Philippines Diliman in 2015

The language education industry has a history of more than 100 years.
The educational knowledge and achievements that have been built for many years, and the confidence of the participants.
The combination of these elements is realized through the so-called “quality of education.”

However, lessons take place only once a week or at least twice a week.
It was hard to say that ideal learning opportunities were provided and speaking opportunities were secured since it was infrequent.
This was because it was an offline business model because it entailed high operating costs, such as high personnel costs for native tutors and high rents in front of stations, and students had to pay high tuition fees.

The challenge was obvious, but Shimomata held a dilemma that he couldn’t find a solution.

image. Online lessons are affordable  and learner can speak English much more than offline

Light came from an unexpected angle.
The breakthrough was the online English conversation business.
Technology can dramatically reduce operating costs.
Even at reasonable prices, the company was able to provide man-to-man lessons every day and secure an overwhelming volume of speaking.

Shimomata always had the idea that “English education is a practical course.”
To be able to speak English, one lesson a week is not enough.
He had the conviction that you can be able to speak English in a quick term by speaking English everyday, even for 30 minutes each day.
However, if you take a lesson at an English conversation school every day, it becomes a very expensive tuition fee.
Not everyone could take the course.

At that time, however, online English conversations were not considered to have a higher quality lesson than offline conversations. In other words, there was a major barrier of how to improve the quality of online lessons.

Originally, the online English conversation business has a short history. The new service was launched in the mid-2000s.
Despite the advantages of technology, will the entry into the language education industry take on the challenge of the quality and depth of history of education that has been cultivated offline?
How far can online lesson provision transform language education?

Nevertheless, it is worth trying. This is precisely because it is zero scratch.
In October 2014, he joined RareJob, relying on new possibilities that were neither imitated nor followed. 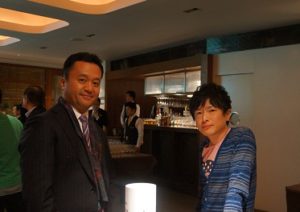 “Originally, RareJob started its business by matching “Japanese people who want to learn English” with “Filippinos who have English teaching skills.”
The nature of some types of IT operators was strong, and it was not a problem in terms of proposing new services.

On the other hand, the overcrowded industry was gradually weeded out, leading companies began to enter, and the online English conversation industry itself began to search for new growth.
In addition, the online and offline barriers were being removed, and the “quality” of the lesson itself was being questioned, in essence, how much results could be achieved.

In other words, we have entered a phase in which our attitude as an educational enterprise and the quality of the education we provide are being questioned.

Education-education to maximize learning effects and steadily produce “results”-is based on the pyramid structure.
The foundation is the knowledge of English education. Without this, there can be no truly high-quality education.
It is only by constantly pursuing better methods, such as responding to changes in needs, and introducing new ideas and methods, as well as basic knowledge, that will enrich the foundation.
What we will build on from that is technology as a means of expanding diverse possibilities.
At first, it started with the technique of online lessons. Offline services cannot beat off-line services simply by providing off-line offerings as online.
Online strengths and added value need to be added.
Automatic speech tests and automatic scoring with AI can also be said to be the value that technology can produce.

The important thing is to firmly establish the educational foundation before using technology.
If we are to provide services as an educational service provider, this order is not the case.
In other words, what RareJob at that time had to be challenged first was solidification of the footing based on the knowledge of education.
In response, the company launched Quality Control Department (then Quality Control Department) six months after joining the company as a brain, who is responsible for the educational field of RareJob.

The lecture for RareJob Philippines staff

However, if one is to sincerely face up to the quality of education, then the system alone is not enough.

RareJob have a service mission to “allow 10 million Japanese to speak in English.”
However, what state of affairs does “being able to speak English” actually mean?
Don’t you say “I can speak English” when you understand the meaning of “This is a pen.” and can pronounce it?
“If I can speak English”” is as fluent as a native speaker, and I can use a wide variety of vocabulary and expressions, how many English words should I learn and how many different phrases should I use?”

At that time, there was no clear answer to the question.

RareJob and the world understood that the definition of “speaking English” varied widely among individual organizations and that the common English-level indicators had not yet penetrated.

Definition of “Able speak English.”
The starting line appeared. It also provides insights into the way to go.
Then, “some” was floating on the underside of the brain.
A global index of languages that was established in 2001 and spread from Europe to the rest of the world.
This is a new language education indicator that the offline industry has been focusing on in Japan since around 2010.

If CEFR, it can be used as an indicator for objectively considering and showing guidance and evaluations from foreign language learning.
It had enormous potential as a way for RareJob to earnestly improve the quality of their education.
At the same time, however, the difficulty of practical application was also known below.
At the time, few precedents were introducing and practicing CEFR in Japanese-language training.
Of course, no one at the RareJob at the time was aware of the meaning and value of CEFR.
It was clear that the unknown challenge was a fairly hard and long-term challenge.

Then I’ll do it one by one.
Shimomata was already determined.

Takeshi Shimomata
CQO, Program Development Div. Head
He joined Recruit Co., Ltd. as a fresh graduate. Wishing to start a business outside Japan, he went to Malaysia by himself and launched an education business that he managed for 14 years. After returning to Japan, he was involved in the development of English teaching materials and global human resources at Bandai Co., Ltd. and Berlitz Japan, Inc., leveraging his experience of launching and managing a business in Malaysia. He joined RareJob in 2014. At the company, he served as CQO and engaged in the development of teaching materials and the improvement of the teaching quality of tutors, among other duties, before taking the position of an executive officer in 2015.
HOME > Challenge > (Series: Questing &#8220;Quality&#8221; in Education vol.1) Want to create a service to be able to really “speak English”. Reason for jumping into the online English conversation business from the English conversation school